A couple months ago, I had the pleasure to interview NDA, a Philadelphia based artist who is redefining the way street art is being done. Pulling from that same interview, in my very own words, I stated: “NDA mastered the art of feeling the environment in order to change it, mainly through expressive, intimate and challenging artworks”. What I did not know back then was that NDA had bigger plans in mind when it comes to changing his environment. This time, he outdone himself and gifted the city of Brotherly Love with something entirely new. He temporarily changed his surroundings and I got to experience it all.

He called me a week before and asked if I could help out with some sculpture installs he would’ve been working on, but unfortunately our plans got cancelled because of the rain. A week later, I found myself knocking on his door, feeling unsure on what I was about to see (and ultimately carry around).
And there they were. 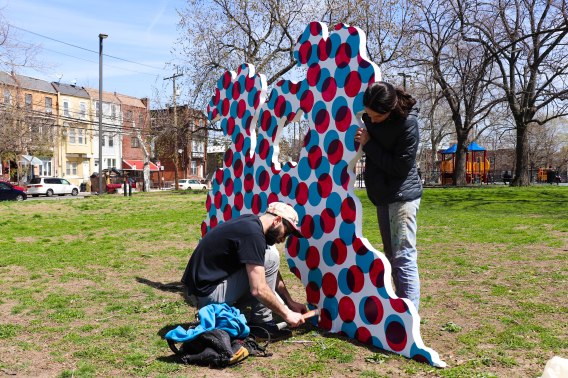 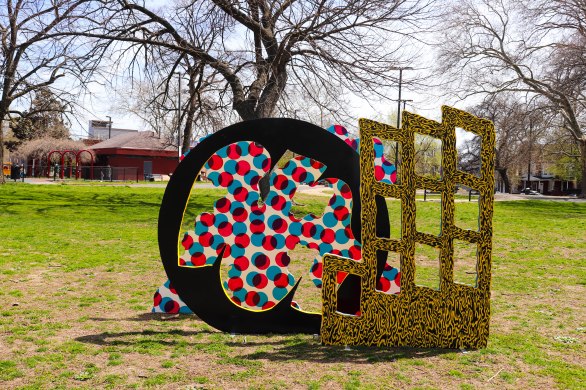 Four large, vibrant and colorful sculptures made of styrofoam. The patterns illustrated NDA’s singular signature: dazzling circles, funky gradients and sharp edges. As I was standing next to them I realized the friendly nature of these pieces and I couldn’t wait to see the late April sunlight reflecting on each one of them. The pieces were fairly light and easy to carry around, so we packed our bags and headed to the first location: Wharton Park in the Point Breeze neighborhood. The idea was to place the sculptures around and see what we could come up with.
Throughout our walk to the park, several eyes were on us. Some confused, some surprised, but above all else, lots of smiles. People gave out compliments, asked what in the world we were doing and some just watched our clumsy walk, holding tight to the pieces every time a strong wind breeze would try to blow them away.
When we got to the park, we placed the pieces next to each other and that was the first instance we could see the whole picture.
The environment was changed. We were quickly welcomed by a wave of little kids who were at first, highly skeptical. They weren’t sure if they could touch them, walk around  or even play with them. The skepticism was instantly replaced with laughter and lots of running around when NDA told them they could play with the pieces. The interaction was formed and suddenly everyone wanted to help and be part of the project. The kids were offering help to hammer the stakes into the grass, move the pieces around and even asked to borrow my camera to photograph them. They had strong opinions on how we should place each piece. We were all ears. 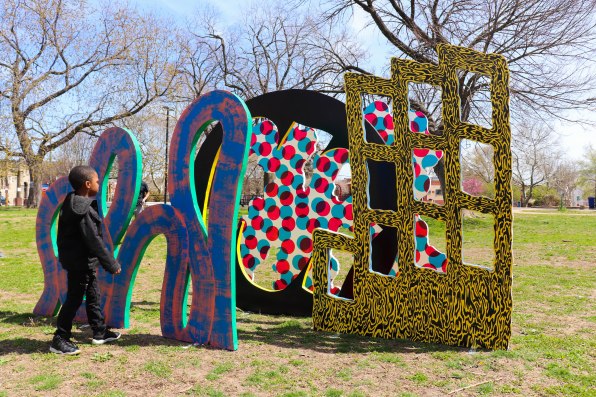 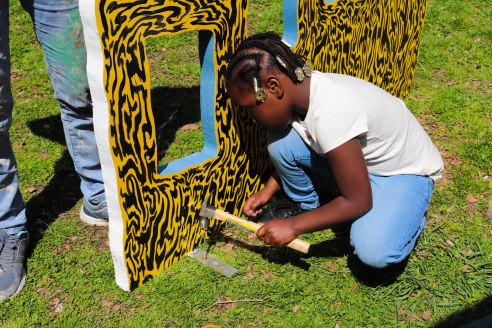 That was the moment that NDA did not plan for. He found himself running around with the kids and bumping into his own inner child. They were reluctant to leave us alone and insisted on keep helping with the install, even though we were heading to another location.  After all, how could you forget the day that a group of four people brought large and bright sculptures to the neighborhood park? But it was time to say goodbye. 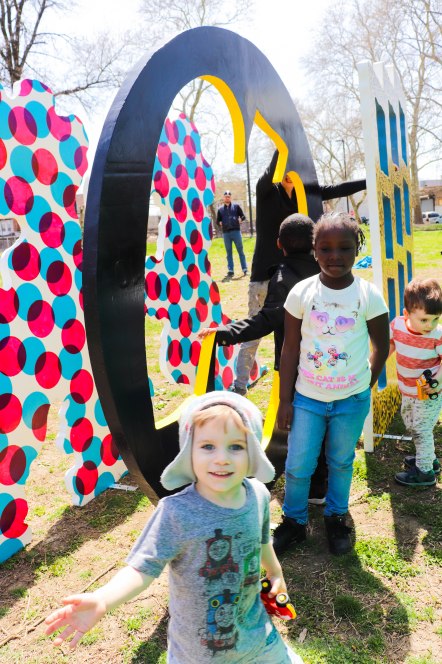 “The whole time I was making this work in my studio it felt like something was missing from the experience. I knew that the the thing that would solidify the project to me and make it feel real were the environments and the interactions. As soon as the children came over during the first install and begin to play and engage with the sculptures was the moment that it came alive to me. I have been buzzing from that experience ever since and it’s filled me with new ideas on how to push the level of interaction with the work for future versions.” said NDA.
The engagement.
The curiosity.
The feeling of being part of something greater.
Art proved again to be the ultimate healer.
After the successful experience at the park, we headed to a more isolated road currently under construction. We placed the pieces in the middle of the street but cars kept ignoring the traffic signs and driving by it. Once again, endless curious looks. The environment was changed again. We took our pictures, glanced at the pieces one last time and took them back to NDA’s house. It a was short lived experience, but undoubtedly meaningful. 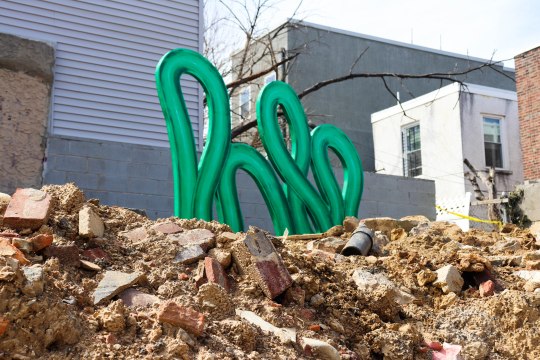 For now, all we can do is hope to see more of NDA’s action around the city. Meanwhile, go follow him on Instagram to see what he’s been up to: @ndastreeart